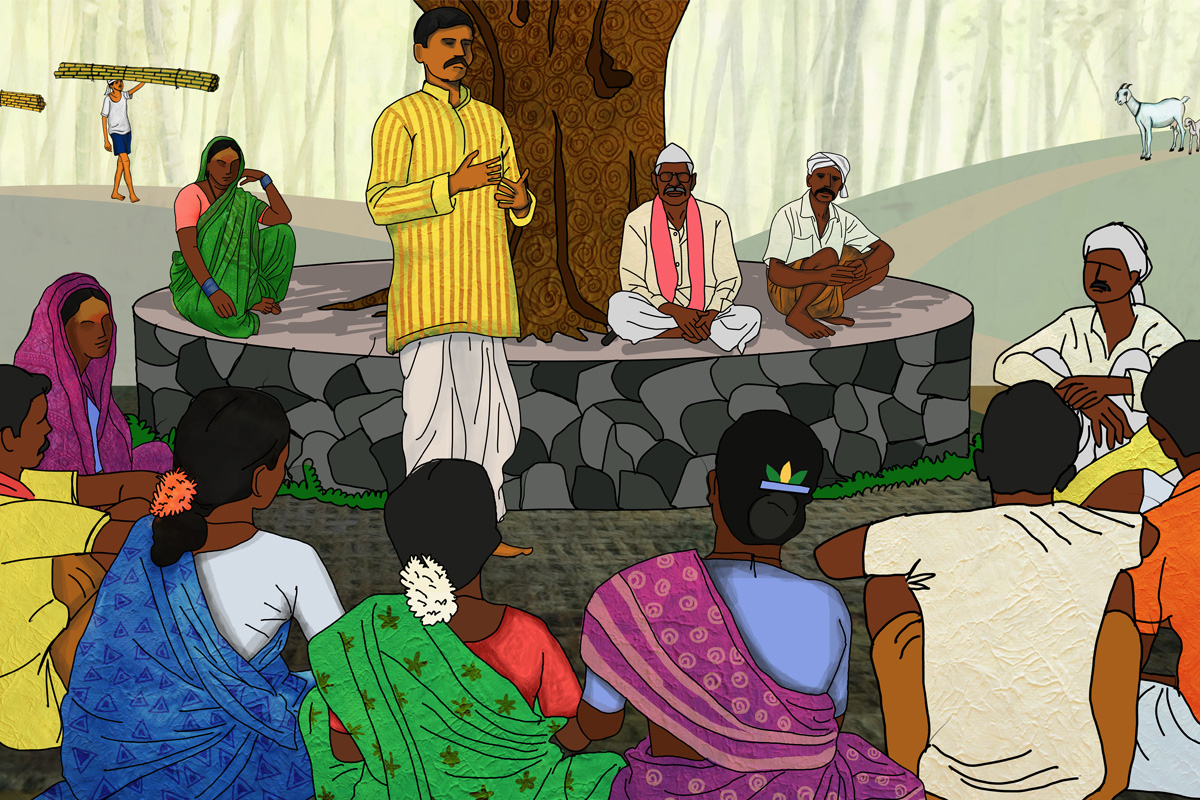 The provision of (Extension to the Scheduled Areas) Act, 1996 came into force on the 24th December, 1996. Orissa Gram Panchayat Act, 1964, Orissa Panchayat Samiti Act, 1959 and Orissa Zilla Parishad Act, 1991 have adopted the provisions of the PESA Act. It covers 7 districts i.e. Mayurbhanj, Sundargarh, Koraput, Malkangiri, Rayagada, Nowarangpur and Kandhamal in full and Keonjhar, Gajapati, Kalahandi, Balasore, Sambalpur and Ganjam in part spread over 1966 Gram Panchayats in 118 Blocks in full and 3 Blocks in part. Accordingly 24734 Wards out of 87542 Wards, 1966 office of Sarpanch out of 6234, 1965 office of Panchayat Samiti Member out of 6233 and 256 Members of Zilla Parishad out of 854 come under the Schedule Area. Elections to these offices were conducted as per the provisions of the PESA Act.

It seems that the State of Orissa had complied, though not fully, with the provisions of the Central PESA Act while modifying its PRI Acts. Mandatory provision in the Central Act ensuring tribal communities: control over natural resources, granting licenses for minor minerals and their exploitation and acquisition of land by government for development projects which proposed to be enforced through Gram Sabhas have not been complied with. Currently the Panchayat Rules of Orissa Government confirms the reservation of seats for STs in scheduled area on the proportion of their population. All the pasts of Chairpersons of the PRIs at all levels are reserved for STs.

The SC and ST Development Department has made suitable amendments in its existing acts / rules and regulations within the parameter of PESA Act. The Orissa Scheduled Areas Transfer of Immovable Property (by Scheduled Tribes) Regulation of 1956 has been amended by Regulation of 2002 (Regulation I of 2002), which has come into effect from 4.9.2002. The Orissa Scheduled Areas Money-Lenders¶ Regulations, 1967 (Regulation and of 1968) is in operation since 15th November 1968 with a view to regulating and monitoring money lending activities in the scheduled areas of the State. Further different relevant departments have devolved some powers to PRIs and they have suitably brought amendments to the existing rules. Let us appreciate the deliverables of PESA in Orissa in little details.

Enforcement of Prohibition & Sale of Intoxicant: Revenue & Excise Department vide their Letter No. 22977/R dt. 22.04.1999 by amending the Bihar & Orissa Excise Act 1915 provides that no such license of exclusive privilege shall be granted except with the prior approval of the concerned Gram Panchayat with the concurrence of the Gram Sasan the G.P. is to give permission within 30 days.

Money Lending: The SC & ST Development Department has already taken up for amendment of the Orissa (Scheduled Areas) Moneylenders Regulation, 1967″ to empower the GP for control over money lending & issue of license in Scheduled Areas. They have also provided that if any Panchayat gives any false information then the Sarapanch or the concerned officials shall be punishable under the provisions of law. It is under the consideration of Law Department. Management of Minor Irrigation Water Bodies: It is vested with ZP. Minor Minerals: The Mines & Minerals (Development & Regulation) Act of 1957 (67 of 1957) has been amended on 31.08.04 wherein no perspective license or manning / quarry lease or its renewal or auction of source shall be granted without recommendation of the concerned GP. Transfer of Tribal Land: The Orissa Scheduled Areas Transfer of Immovable Properties (by STs) Regulation 1956 has been amended by Regulation 1 of 2002, which has come into effect from 4.9.2002. Control of Village Markets: Although Panchyati Raj Department has amended its Act transferring the power to Gram Panchayat but the matter is subjudice.

Status of implantation of pesa act in the state of odisha

Ministry of Panchayati Raj review the implementation of PESA Act, time to time and pursue with the States to expedite action to bring Panchayati Raj Act and subject laws in conformity with PESA Act. Ministry had conducted a Study on compliance of the State Panchayati Raj Act and other concerned subject laws with the provisions of PESA Act. The Study Reports were circulated to all the PESA States including Odisha, with a request to consider and make necessary amendments in State laws, wherever required, for compliance to PESA provisions. The status of implementation of PESA Act in the State is as under: